Set the Piano Stool on Fire

This film was over two years in the making and explores the relationship between teacher and student at a standard of piano musicianship only the fewest, most talented every reach. It was a great privilege to see a tutoring at such a high level and the music was a joy to listen to and record.

I wasn’t the only recordist to work on the film, and the concert performances where recorded by a whole different team but apart from a dodgy bit of (self shot, nothing to do with me!) interview sound near the start the documentary sounds really good. I even managed to get out some of my most lovely mics to record the piano for the closing credits.

I was very pleased to read a comment from a viewer who had seen the film at a Q&A screening which said “The sound, as Mr Brendel himself commented, is superb…” 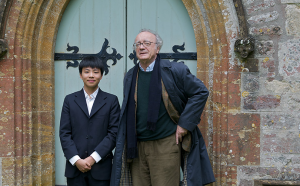 © 2021 Mary Milton. Created using WordPress and Colibri
We use cookies on our website to give you the most relevant experience by remembering your preferences and repeat visits. By clicking “Accept All”, you consent to the use of ALL the cookies. However, you may visit "Cookie Settings" to provide a controlled consent.
Cookie SettingsAccept All
Manage consent