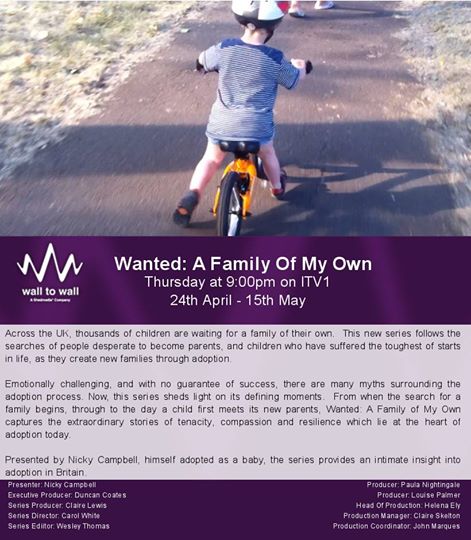 Wanted: A Family of My Own – Episode one
The profoundly life changing process of adoption is uncovered in this new four part series. Following the stories of parents desperate to adopt and children who need families, cameras have been granted access into many defining moments of the adoption process from prospective parents’ meetings with social workers and facing adoption panels, to the moment a child leaves their foster carers and meets their new parents for the first time.
Presented by Nicky Campbell, himself adopted as a baby, the series sets out to provide an intimate insight into adoption in Britain today, through the experiences of children and couples followed at close quarters as they progress through the proceedings involved.
In showing key stages of each child and each couple’s experience, Wanted: A Family of My Own, offers a rare perspective on the impact of adoption on the lives of those involved. Looking at why children need new families, the range of people who want to adopt and how the process operates, the series builds an understanding of adoption today which may challenge preconceptions.
Across the series we meet a gay couple who thought they would never become parents, a single mum who is adopting for the third time, a baby boy who was born addicted to crack cocaine and couples who, after struggling with infertility, are finally getting close to having families of their own. The unique access to each story was acquired by working in partnership with local authorities across the UK over a two year period.
Nicky was born in Edinburgh in the 1960s. His birth mother travelled there from Ireland to escape the stigma of being pregnant outside of marriage. After being born in the Scottish capital, Nicky was adopted when he was a young baby. The circumstances leading to children being put up for adoption have changed over the years but a large number are still waiting for new families.
Nicky explains: “The shame of illegitimacy back then meant thousands of women across the country gave their children up for adoption each year. Today children are rarely given up for adoption, the vast majority are taken away from their birth parents because of a history of neglect or abuse.”
Dan and Ania who have been together for six years are desperate to adopt. Originally from Poland, Ania met Dan when she came to the UK to work. Dan has two daughters from a previous relationship and the pair want to complete their family by having children of their own. After Ania suffered two miscarriages they decided to look into adoption.
Their first step is to meet with their social worker Fran who assesses their suitability to adopt. As Ania tells the programme, in these meetings, every subject is covered, from discussions about their own childhoods to their financial history. Fran prepares Ania and Dan to face an adoption panel where it will be decided whether they will be allowed to adopt. Made up of independent professionals and people who have personal experience of adoption, the panel can ask the couple anything about their family background, medical history or even their personal temperament.
Ania says: “It’s quite funny that our social worker knows us better than our families. She knows everything even our ups and down and stuff you normally don’t share with your family – she knows!”
The panel are unanimous in their approval for Dan and Ania to become adoptive parents and the search can now begin to find a suitable child for them. Dan says: “We’ve been working towards this day and now we’ve done it we can stop focusing on us and focus on finding the correct child to join our family.”
The social worker Fran will now try to match up a child with the couple. Nicky explains: “The most critical part of the adoption process is matching a child with the right parents. The one thing everyone wants to avoid is the adoption breaking down after the child has moved in with the new family.”
When Fran next visits the couple she brings information about two children who need adopting. Will this finally lead to them having a child of their own?
Also in the first episode we see the story of a baby boy who is nine months old and lives with foster carers Angela and Mick. The couple, who are both in their seventies, have fostered over 100 children. They have looked after him since he was nine days old as his parents both have severe mental health problems. Mick says: “He was very, very quiet in those early days and we were quite concerned. He didn’t cry and that was odd, it was as if he had switched off. Babies cry, they are supposed to.”
Angela adds: “We had to wait until he made a noise then we’d pick him up and he learnt very quickly he was being cared for and it was all ok.”
Although he is developing at a normal rate, his parents’ mental health history means his social worker Claire is struggling to find adoptive parents and she has been looking for the last three months.  She arranges for him to attend an adoption activity day where prospective adopters can meet children face to face and see if any bonds develop.
Angela says: “I just pray and hope that there is someone out there who will just fall in love with him. We have fallen in love with him and my goodness if I was 30 years younger we would be fighting to keep him.”
The longer he stays with Angela and Mick the more they worry about how he will cope with leaving them when adoptive parents are found. Angela says: “Coming up to nine months he’s become totally attached to me. So I think it’s going to be harder for him to break away and reattach. It’s going to be a bit more traumatic I think.”
adoptionitvnicky campbell