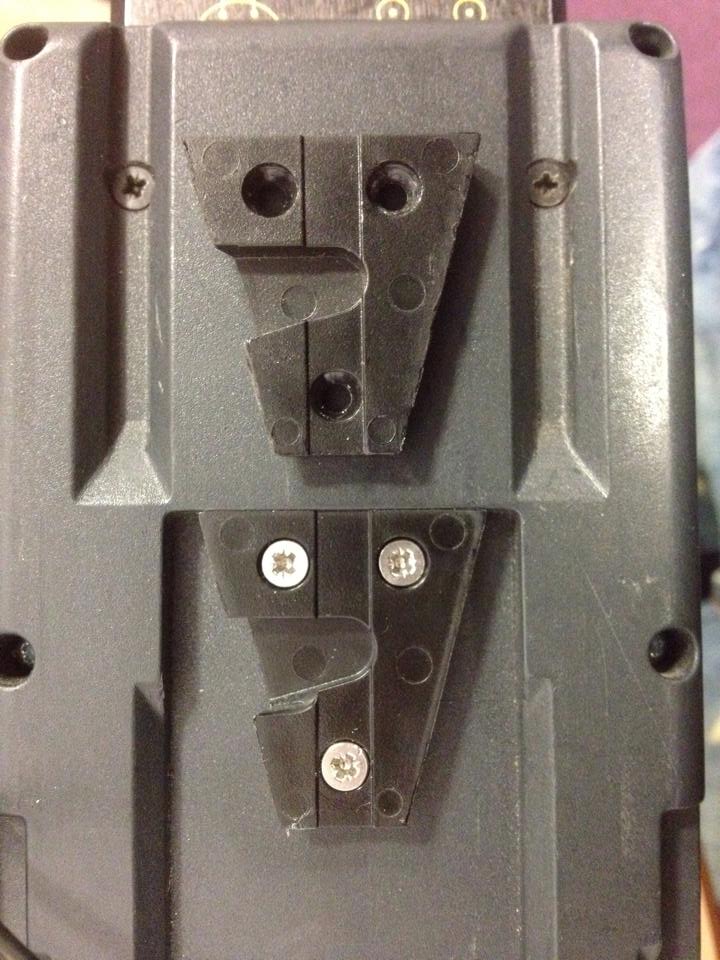 Categories:sidebarsoundSound Tips
by Mary |
on May 8, 2015

I have been using for some time a pair of Audio Ltd 2000’s as a camera hop, they make a great hop and I have a couple of different Hawkwoods bracket type arrangements that I use to attach them to a camera. My favourite puts the radio mic receivers inside a box which attaches between the V-Lock and the battery on the back of the camera.

I’ve used both these set ups on a variety of different cameras but recently came up against a problem with the Sony F55 and Sony FS7. The V-Lock plate appeared to lock on to the camera but any reasonable pressure from underneath – eg if the camera operator tried to guide the shot by putting his hand under the battery and the plate popped off.

You can imagine this was pretty annoying. It took us a while to find a solution but it was simple in the end. HawkWoods supplied me with a new “V” for the plate. It’s the bit of plastic held on with three screws. You can see in the picture that the lower plate has an extra bit taken out of it. This allows the plate to latch on the F55, the plate above is the old one for comparison. One annoying problem solved – thanks HawkWoods.

We didn’t like the Sony FS7 by the way. Lots of spongy buttons that can get annoyingly knocked and auto functions that trip you up. I hated the fact that you could only see the audio levels and the timecode in the viewfinder, it meant it was impossible for me to look over and check them every now and again which we were recording, which I like to do. Anyway the VLock is now as solid as a rock and I have had the XLRs on my the integral leads replaced with right-angled plugs which suits the F55 much better.